“A Conversation With … Soledad O’Brien”

“From a journalist to a CEO, Soledad has illustrated through her career how important equal representation is for people who don’t feel heard or seen, providing riveting content and steps forward in socio-cultural issues with the specific focus of elevating women.” — Meghan Cummings, the Women’s Fund Executive Director

The Women’s Fund of Greater Cincinnati Foundation created its signature event “A Conversation With …” in 2012 as a forum for a female history maker to share her journey, including triumphs and obstacles, in an intimate setting. Those history makers, in previous years, have included Dr. Mae Jemison, Abby Wambach, Cokie Roberts, Lisa Ling, U.S. Senator Olympia Snowe, Phyllis S. Sewell and Marian Spencer.

“We are ecstatic about Soledad coming to Cincinnati,” said Meghan Cummings, the Women’s Fund Executive Director. “She’s a phenomenal journalist whose innate ability to stimulate thoughtful conversation through storytelling gives voice to underserved and disenfranchised demographics. We’re thrilled to be able to showcase her insights to our supporters on the roles we each can play to make meaningful and lasting change for women and their families.”

O’Brien, the CEO of Starfish Media Group, a media production company dedicated to telling empowering, authentic stories on a range of social issues, has had an illustrious career in journalism. She produces and anchors the Hearst Television political magazine “Matter of Fact with Soledad O’Brien,” which airs at 11 a.m. Sundays on WLWT-TV (Channel 5). She also reports regularly for PBS NewsHour and HBO’s “Real Sports with Bryant Gumbel,” and has appeared as an anchor or contributor on all three major networks. At CNN she anchored two morning news programs and created the “In America” documentary series “Black in America” and “Latino in America.” She received two Emmy awards for her coverage of race issues, and a third for her reporting on the 2012 presidential election. A prominent philanthropist, she and her husband Brad Raymond founded the PowHERful Foundation, which mentors and funds college tuition and expenses for young women.

Tickets for “A Conversation With … Soledad O’Brien,” $50, are on sale now at www.cincinnatiwomensfund.org. Host and hostess tickets, which include a private reception with O’Brien, are $250. All proceeds benefit the Women’s Fund of Greater Cincinnati Foundation. 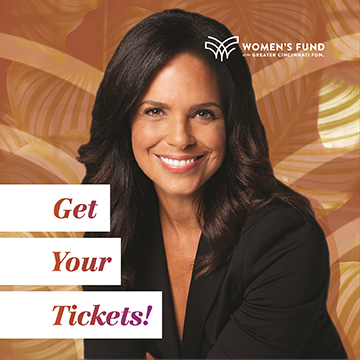